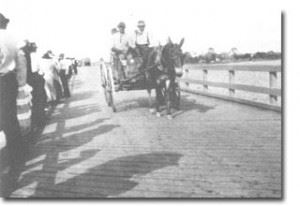 Ancient artifacts unearthed on the island indicate that local Indian tribes had a presence on Anna Maria as long as 2000 years before the island was 'discovered' by Spanish explorers. There is nothing however, to indicate a permanent settlement as the Calusa, Tocobagan, Ucita, Meceso and Pooy tribes of the Tampa Bay area probably found the barrier island soil unsuitable for their primitive agriculture. More likely they ventured to the island to fish and swim in the surf.

The Spanish discovered the island in 1530. Anna Maria was named and charted long before Florida became part of the United States.

The first permanent settler on the island was George Emerson Bean, who built his 1893 homestead on the northern tip of the island in the area that now bears his name. (Bean Point).

In 1921, the first bridge was constructed from the Village of Cortez to Bridge Street on the Island. Before this time visitors got to the island by boat. This made Bridge Street the center of the bustling island community. In 1926 a bridge to Longboat Key was erected. 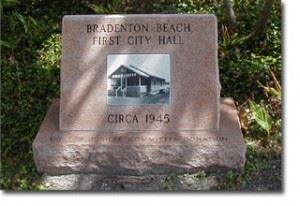 At that time the community was known as Cortez Beach. In the late 20's the editor of the Bradenton Herald began calling the city Bradenton Beach and the name stuck.

The city of Bradenton Beach was incorporated in 1952 and in 1967 the new draw bridge was opened to 5th Street North. The island side of the old wooden bridge was saved and turned into a fishing pier, which still stands today.